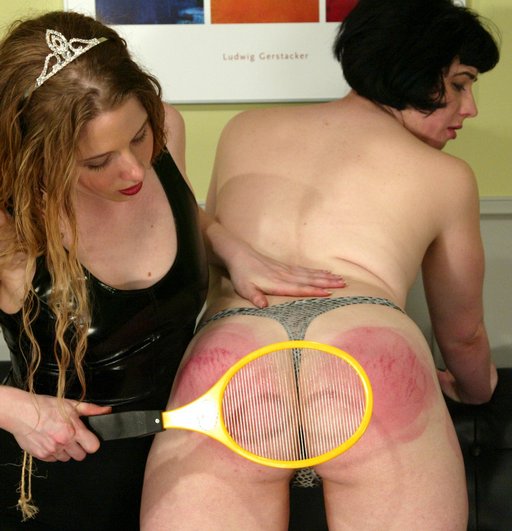 The post ends with “Somewhere, Thomas Edison is smiling in his grave.” That made me smile, too.

Using The Humbler To Enforce A Squat

ErosBlog found an amazing Tumblr pic of The Humbler being used to keep a man in a painful squat:

So you’ve probably all seen (online, anyway) the Humbler bondage device that locks a man’s balls back behind his legs when he’s in a bent-over position, and thus tends to keep him bent over until released, while exposing his stretched scrotum for particular attention.

However it wasn’t until I saw this photo on Tumblr that I realized that it could also be used to enforce a squatting position, by locking his balls in front of his ankles.

I suspect that position is not terribly stable, and he can probably re-arrange himself a number of ways. But when the slightest motion is going to tug roughly on the already-strained family jewels, the incentive is probably to stay as docilely still as possible…

The Zapper Paddle In Penthouse

A reader spotted and sent along this a brief mention of a zapper paddle in Penthouse Variations magazine, in a letter from Ms. Diana A:

The other day, he surprised me with a kind of spanking toy I didn’t even know existed: an electric zapper paddle. It’s actually a fly swatter, but Corey found it had a much more entertaining use. It wasn’t a toy you could hit someone particularly hard with, but Corey didn’t need to, because the little zing it delivered to my skin set me off!